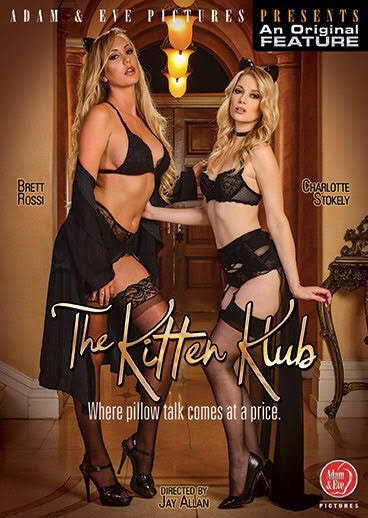 Adam & Eve Pictures presents “Kitten Klub”, a sensual tale of sex, seduction, and espionage. The film, now available on DVD and exclusively at Gamelink.com on VOD through May 14th and then will be released everywhere, stars Brett Rossi and is filmed on location at an exclusive private club.

“Kitten Klub” tells the story of a private club run by a sultry headmistress (Brett Rossi) who caters to handsome wealthy men with a bevy of lingerie-clad beautiful women whose purpose is to make their sensual fantasies come true in the club’s erotic masquerade balls. As she recruits sophisticated young women for her club, her new proteges discover her objective, beyond providing company and sexual favors to high-powered men, is to use their feminine wiles for political and industrial espionage. These kittens choose their targets wisely and dig for gold, or in the case of one wealthy prince (Ryan Driller), the adorably sexy kitten (Aidra Fox) angles to get her hands on a priceless painting… if she can double-cross a dirty double-crosser.

“Jay draws compelling performances from the cast to tell a modern story ripped from today’s headlines,” said Rachel Vigneaux, Adam & Eve’s executive producer. “With his unique vision and talent, Jay presents some of the industry’s hottest stars in an adult film that is sure to connect with fans and critics alike!”

Jay Allan is known for last year’s acclaimed Adam & Eve release “Beautiful Strangers,” which earned AVN and XBIZ awards nominations for Best Cinematography and Best Sex Scene – All Girl, respectively. It followed the success of “Agent 69,” from Adam & Eve which earned five AVN nominations and seven XBIZ nominations, including a win for Best Music. His past work for Adam & Eve includes “Riley Reid Overexposed,” “Secret Cravings,” “Open Couples,” “Secret Spa,” and many others. Prior to arriving at Adam & Eve, Allan had earned a reputation as one of the top photographers in the adult industry, with his work featured in a variety of top adult magazines and other print and online publications.