New Film by Kay Brandt, Based on Selena Kitt’s Best 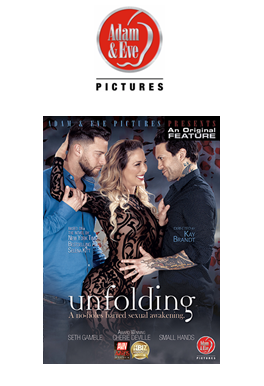 Adam & Eve Pictures’ critically-acclaimed blockbuster “Unfolding,” from renowned director Kay Brandt, has reached No. 1 on HotMovies.com’s Most Popular Movies chart, while also reaching theAdultDVDEmpire Top 5 for best-selling movies. The movie is available on both of the aforementioned sites, as well asAdamEveVOD.com and elsewhere.

“Unfolding” tells the story of Charlie (Cherie DeVille) who lives a normal, happy life with her dedicated and loving husband, Jack (Seth Gamble). But when Charlie discovers Jack’s interest in pushing the boundaries of their traditional marriage, she confronts her own hidden desires. Together, they spend a magical weekend at a romantic resort designed for couples who want to explore their sexual fantasies with other passionate couples. This is the story of Charlie’s exquisite unfolding, as she and her husband push their boundaries and surrender to something much deeper than anything they’d previously experienced — a mindblowing, transcendent, sexual tour de force where decadent fantasies are brought to life.

The movie was hailed by HotMovies.com’s Stoney Rubble who wrote: “‘Unfolding’ is a beautifully-shot depiction of sexual exploration in a marriage. It’s always so damn refreshing to watch such a healthy married relationship on screen, helped in no small part by the amazing chemistry and performances Kay Brandt coaxes from her talented stars Cherie DeVille and Seth Gamble.”

Likewise, AdultDVDTalk’s Flash wrote: “Unfolding is another collaboration between Kay Brandt and Selena Kitt and, as with Kay Brandt’s past collaborations with Selena Kitt, is well worth watching. Unfolding is a romance story of a husband and wife finding their inner sexual beings through a sexual journey with each other.”

He added: “‘Unfolding’ is beautifully made and is sure to be on the AVN and XBIZ award nomination lists for 2020 for best feature and best sex scene.”

Known for her directorial work in the Adam & Eve blockbuster, “Babysitting the Baumgartners” as well as its award-winning sequel, “Adventures with the Baumgartners,” Brandt has been on a roll, earning accolades for adapting Kitt’s best-selling erotic novels and directing other features. The prolific filmmaker has directed more than 60 adult movies since 2009, including nine movies for Adam & Eve beginning with the adaptation of her book “Safe Landings” in 2015, followed by 2017’s well-received “Hotwives and their Dirty Desires,” as well as last year’s “Naked,” both based upon her own books. Her work includes many award-winning films for companies like Adam & Eve, Digital Playground, Girlfriends Films and New Sensations.