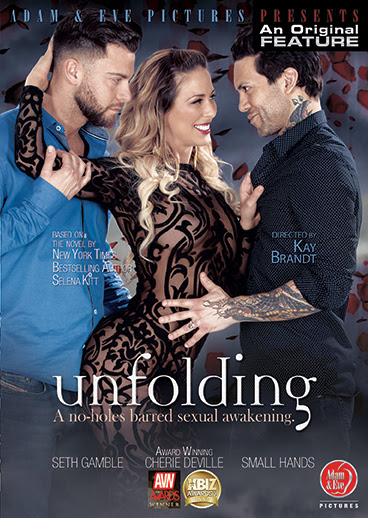 To view the suitable-for-work trailer for “Unfolding,” click here.

“Unfolding” tells the story of Charlie (Cherie DeVille) who lives a normal, happy life with her dedicated and loving husband, Jack (Seth Gamble). But when Charlie discovers Jack’s interest in pushing the boundaries of their traditional marriage, she confronts her own hidden desires as they spend a weekend at a romantic resort designed for couples who want to explore their sexual fantasies with other passionate couples. The film’s cast features adult superstars Cherie DeVille, India Summer and Abella Danger, as well as Seth Gamble, Small Hands and Codey Steele.

“’Unfolding’ was my fourth book-based movie collaboration with Selena Kitt. I had such a strong feeling about the source material when I read the novel that I knew the story had the potential to connect with many – couples, women and men,” said Brandt. “Cherie and India were my first choices for the lead female roles. I had visualized Cherie playing Charlie for months and just knew she would bring the story of this character’s sexual awakening to life perfectly — and, she absolutely did. I’m grateful to the incredible cast of ‘Unfolding’, and also to Adam&Eve for seeing the vision, and supporting yet another successful book adaptation. Together, we’re proving this new genre we’ve been steadily creating and building for the past four years has weight, relevance and draws a worldwide audience. I am proud of our accomplishments and continued success.”

The movie has been the focus of much critical acclaim since its release. HotMovies.com’s Stoney Rubble wrote: “‘Unfolding’ is a beautifully-shot depiction of sexual exploration in a marriage. It’s always so damn refreshing to watch such a healthy married relationship on screen.” Likewise, AdultDVDTalk’s Flash wrote: “‘Unfolding’ is another collaboration between Kay Brandt and Selena Kitt and, as with Kay Brandt’s past collaborations with Selena Kitt, is well worth watching.”

“Unfolding” is the newest film by the Brandt who is known for her directorial work in the Adam & Eve blockbuster, “Babysitting the Baumgartners” as well as its award-winning sequel, “Adventures with the Baumgartners”, and many others. She has earned accolades for adapting best-selling erotic novels from New York Times best-selling novelist Selena Kitt and directing other features. The prolific filmmaker has directed more than 60 adult movies since 2009, including nine movies for Adam & Eve beginning with the adaptation of her book “Safe Landings” in 2015, followed by 2017’s well-received “Hotwives and their Dirty Desires”, as well as last year’s “Naked”, both based upon her own books. Her work includes many award-winning films for companies like Adam & Eve, Digital Playground, Girlfriends Films and New Sensations.