Adult star Alana Luv will appear at the EXXXOTICA NJ, Friday, October 22nd through Sunday, October 24th to announce the launch of the A Luv Media Roku channel. 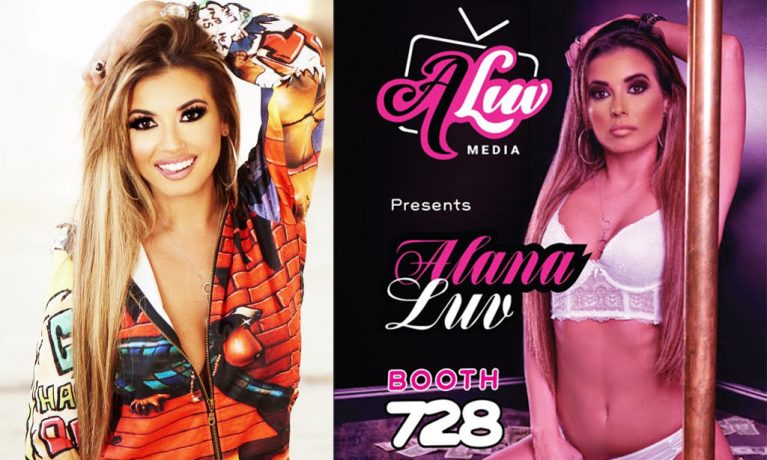 EXXXOTICA is the largest adult event in the U.S. dedicated to love and sex. Taking place over three days, the expo returns to the New Jersey Convention & Exposition Center located at 97 Sunfield Avenue in Edison, NJ 08837.

Previously available only via its website, the A Luv Media digital streaming network features adult stars, comedians, DJs, musical artists, and entertainers from all walks of life, and has very limited restrictions compared to traditional media.

The event will also serve as Luv’s coming out party as an adult performer turned sexy mogul.

“I’m so excited EXXXOTCA is back on and I get to see all my fans again,” said Luv. “I love interacting with all my fans and this time they will not just see Alana Luv as the adult entertainer but also Alana Luv with her own show, network and merchandise — along with a lot more coming to the A Luv empire!”

A Premium Exhibitor at EXXXOTICA, the A Luv Media booth will feature Alana Luv merch, as well as a television monitor steaming content from its Roku preview channel.

Among the content to be displayed at the show will be the latest episode of Luv’s irreverent sex and dating show, “Luv ’N Laughs,” featuring the return of Luv’s friend, award-winning adult star Casca Akashova.

Those who cannot attend the expo can enjoy the hour-long :Episode 36 – The Return of Casca” here ( https://aluvmedia.com/programs/lnl36 ).
Fans can follow Casca Akashova on Twitter: @CAkashova and Instagram: @CascaAkashovaofficial.

For tickets and more information about the EXXXOTICA NJ Expo, visit https://exxxoticaexpo.com/tickets/.

Keep up with the incredible Alana Luv on Twitter: @AlanaLuvXXX / @ALuvMedia and Instagram: @alanaluv_,
About A Luv Media:

A Luv Media is a digital streaming network founded in December 2020 by retired adult star Alana Luv. Part of the A. Luv Entertainment empire, this independent network has very limited restrictions compared to traditional media.

The network’s uncensored and unfiltered shows feature adult stars, comedians, DJs, musical artists, and entertainers from all walks of life. Its shows are available on demand, via our 24/7 digital “TV’ channel (coming Q4 2021), through its website, aluvmedia.com, as well as on Roku & Amazon.

About Alana Luv:
Brooklyn-raised Alana Luv is a former adult film star, feature dance artist, entrepreneur and podcast host.
Prior to entering the world of adult entertainment, Alana earned a Bachelors in Accounting and Marketing from Brooklyn College, worked on Wall Street, and used her degree and personality skills to run promotions for several top New York City restaurants and nightclubs.
The Russian bombshell’s interest in sex work was piqued by watching the HBO series “Cathouse,” set in the world of the courtesans at the world famous Moonlite Bunny Ranch in Nevada.  In 2014, the all-natural beauty took the plunge into X-rated territory, quickly earning a reputation as a dynamic sexual entertainer with stellar oral skills, who delivered intense performances brimming with authenticity.
In 2016, Luv earned an AVN Awards nomination for Hottest MILF, her first of five AVN nominations.
An insightful writer, in 2018, she penned “Facts You Should Know Before Dating a Porn Star” ( https://socialunderground.com/2018/01/facts-know-dating-porn-star/ ) for pop culture website Social Underground.
A frequent radio and podcast guest known for her wit and storytelling skill, in 2020 Luv launched her own podcast, Luv ’n Laughs, featuring fun and unfiltered conversations about sex and relationships with comedians, musicians and adult entertainers.
Today, Luv employs her business skills as the founder of management and digital production company,  A. Luv Entertainment.
She is also inspired by helping others, and from that inspiration founded Luv is Love: a non-profit with a mission to assist victims of domestic violence. “I wanted to help people in abusive situations because years ago, in my time of need, I had no one to come to,” Luv said. “I want to help give them a voice when they feel that don’t have one.”
She resides in New York City.