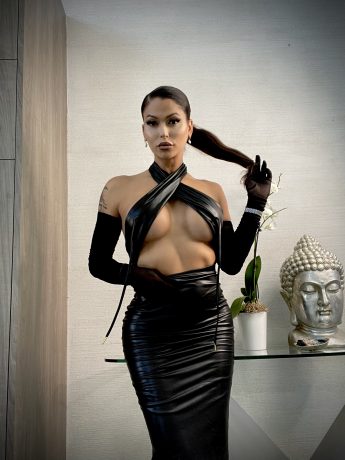 Presley contributed lyrics and vocals to Atlanta-based trans recording artist Alissah’s remix of her hit track, “Daddy.” Alissah shared her song was inspired by an iconic scene from one of her favorite childhood movies, “Kindergarten Cop.”

Presley continued, “This song was written while I was in a horrible relationship, and the lyrics I wrote basically spoke my marriage into existence (if you listen to the song you might roll your eyes at that statement, but it’s true). ‘Daddy’ is an anthem for girls who are tired of fuck boys and being the breadwinners in their relationships.

“I honestly almost had Alissah take my part out or re-record it with her voice because as a Transgender Woman, one of my biggest insecurities is my voice, and there were a few people who cracked jokes about the song when we released it (it was just other trans girls, which sucks worse). But to see a nomination for this project that’s outside of the adult industry…and that I literally wrote myself (just my part), pushed through, and did regardless of the haters and my insecurities, damn. I couldn’t be more proud of a nomination. Music was my passion before I transitioned and I never thought I would get back into it so thank you for the nomination, AVN, but most importantly, thank You, Alissah, for believing in me, pushing me, and allowing me to be part of your art.”

Presley has racked up numerous nominations and awards during her illustrious career. Notably, she was one of the first trans performers to be nominated for a non-trans specific award (XBIZ Best VR Sex Scene), which she won in 2019. In addition to her multiple TEA wins, she also served as the official TEA Mistress of Ceremonies in 2019-2021.

Originally from Atlanta, GA, Presley started out as a Drag Performer under the name Jazmin Aviance. She still performs and competes in the Ballroom Scene as Jazmin Balenciaga.