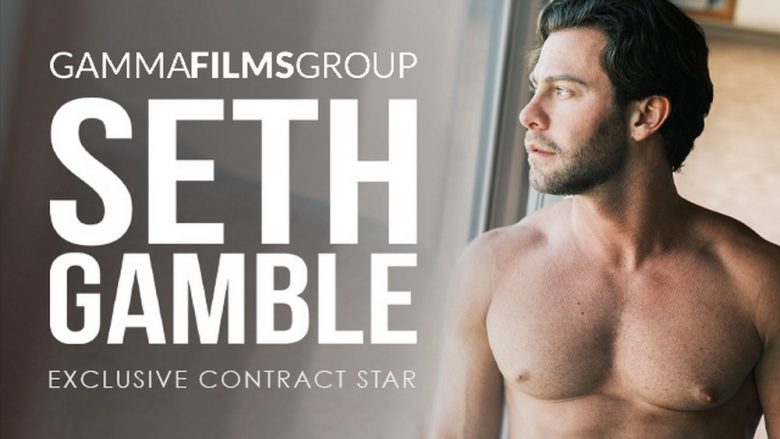 Gamma Films Group has signed an exclusive contract with multiple award-winning performer Seth Gamble.  A 15-year veteran, Gamble has risen to become one of the most sought-after male performers in the industry and a bona-fide legend in the world of adult acting, winning the last three consecutive ‘Best Actor’ awards, two of which for projects produced by Gamma brands. It is the first ever exclusive signing of a performer by the Montreal-based adult powerhouse.
“I’m beyond grateful and honored to be contracted with Gamma. I’ve always felt a part of the Gamma Family through our consistent work together and now I officially am. I’ve been working in this industry for 15 years and I can say I’ve been very fortunate for all I’ve accomplished. I have to thank one of my best friends, Axel Braun, for helping make this happen. Axel saw my potential early in my career, when he cast me as Luke Skywalker in “Star Wars XXX”, and since then we’ve done some of the most amazing projects together, such as “Deadpool XXX”, “The Possession of Mrs Hyde”, and soon “The Batman XXX”. He genuinely values me and appreciates me not only as a performer but also as a friend, and most importantly as a human being, and I am beyond excited for all the projects we’ll be able to bring to life in the near future. I also want to thank Bree Mills for being such an inspiration and a creative force. We’ve always had an amazing working relationship, and Bree has always pushed me to excel and always managed to get the best out of me, as she did with “Perspective”, a brilliant movie for which I won my second-Best Actor AVN award.”
Braun and Mills, two of Gamble’s most frequent collaborators, were thrilled at the prospect of being able to work with Seth exclusively.
“Signing Seth was literally a no-brainer!” Said Braun, who serves as Head of Production for Wicked Pictures. “He’s not only one of the top male performers in the industry, but also a three-time consecutive Best Actor award winner and one of my closest friends. On top of that, he’s a consummate professional who has consistently gone above and beyond the call of duty to help elevate the quality of each project he’s ever been a part of, and he unfailingly brings a jolt of positive energy to every set. He has an absolutely relentless “Method” approach to acting, and the uncanny ability to completely transform into every character he plays…just watch him in any of the many projects we’ve done together over the past 10 years and I dare you not to be awestruck at the fact that the same person could embody to perfection roles as diverse as Luke Skywalker, Captain Boomerang, Mr. Hyde and Deadpool. Seth is driven, focused, passionate, and has a winning mentality without the ego that’s typically associated with it. He has consistently shown me a level of commitment and an emotional depth that I have never encountered in my 31 years in the adult industry, and I always knew he was a major asset not only to my movies but to any production. Luckily, much like everybody else in the business, Bree and the rest of the Gamma team have been well aware of Seth’s worth for quite a while, so when the opportunity presented itself, we acted quickly and were able to lock him in. Saying that I am thrilled to have him on board would be a huge understatement, and I am very much looking forward to what we can create and accomplish together over the next year!”

“This has been something we’ve been discussing for over a year now, so I am so happy to finally see it come to fruition,” adds Mills, Chief Creative Officer for Adult Time. “Seth has done some of his best work for our company and I know this is just the beginning. I look forward to creating many more amazing characters together!”

Gamma VP Claude Hyppolite, who negotiated the contract, added:  “Seth is not only a strong fit for our customers and brands, but he shares Gamma’s values for production quality, professionalism, and creativity.  That, above all else, is why we signed him!”
Under his new contract, Gamble will perform exclusively for brands within Gamma’s growing ecosystem, including Wicked, Pure Taboo, and Adult Time.  A creative talent not just in front of the camera,  Gamble and Gamma will also explore creative endeavors for the company together, including writing and directing projects.
http://www.adulttime.com
Follow on Twitter & Instagram:
@sethgamblexxx
@axelbraun
@thebreemills
@adulttimecom