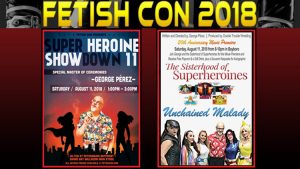 Fetish Con™ (http://fetishcon.com) organizers are thrilled to announce the return of Will Eisner Comic Book Hall of Fame recipient George Pérez(http://twitter.com/perezartist) to its show. Proudly sponsored by Clips4Sale (http://clips4sale.com), the largest networking event for the fetish industry and community on the East Coast. taking place August 9 – 12 in St Petersburg, Florida.

Internationally renowned comic book creator George Pérez’s work is just about everywhere these days; in addition to co-creating the popular “The New Teen Titans,” Pérez also had historic and defining runs on“Justice League of America,” “The Avengers” including “The Infinity Gauntlet,” and most notably, “Wonder Woman.” George’s re-imagining of the Amazing Amazon brought the character back to prominence after years of stagnation; it is his specific interpretation which has been cited as a major influence for the blockbuster film’s success.

While Pérez has been a fetish fan for as long as he could remember, with a particular penchant for catfighting and bondage that sometimes filtered into his comic book art, it wasn’t until 20 years ago that he actually dipped his toes into the public fetish waters when he commissioned a superheroine catfight video through the California-based Double Trouble Wrestling (https://www.dtwrestling.com), which specialized in many forms of female combat, often with an erotic twinge. At first, Pérez merely wrote the stories, but eventually ended up writing, directing, editing, and even performing in the series that would soon have the umbrella title “The Sisterhood of Superheroines.”

The 2017 Fetish Awards Special Recognition recipient and internationally renowned comic book creator will not only be hosting the 11thannual episode of his epic cosplay-meets-bondage show on the main stage at 1-3pmSaturday, August 11,Pérez will be autographing and meeting fans alongside his superheroines at his film premiere later the same evening. Fetish Con™ is one of only two shows at which Pérez will be appearing in 2018. For more information, visit http://fetishcon.com/super-heroine-showdown/.

“It is such an honor to have George (Pérez) returning to Fetish Con™,” says Event Promoter Genesis Lynn. “He’s been coming to the show and meeting his fans for many years, and to have him back for the 11th year is amazing. He’s become a true friend of the show and our attendees, and the Super Heroine Showdown, which is George’s creation, is one of the highlights of the weekend. The fans love it!”

As part of the celebration of the 20th anniversary of the Sisterhood of Superheroines, Fetish Con™ will be holding very a special screening of Pérez’latest film, “Unchained Malady.” Starring Stacy Burke, Saharra Huxly, Kymberly Jane, Jewell Marceau, and Angela Sommers, “Unchained Malady” is a movie-length adventure featuring Sisterhood veteran Daisy Chain (Stacy Burke), trapped in a desperate, but futile, battle with the vicious Malady (Saharra Huxly), who works for an alien menace called Dark Czar. Daisy Chain’s cousin Prism (Jewell Marceau), Sunburst (Angela Sommers), and Compass (Kymberly Jane) complete the quartet of heroines awakened to find themselves each handcuffed to a ring post in the Arena of Champions, aghast to see their own doppelgängers standing triumphantly and sinisterly in the middle of the Arena as Dark Czar hovers above them. As Dark Czar transports the duplicates out of the Arena, the toweringMalady appears, eager to indulge in her favorite pastime – destroying superheroines! Whatever will the Superheroines do?

“When George asked us if we would host the screening of his new movie at this year’s Fetish Con™, you could have knocked me down with a feather!” says Genesis Lynn. “Our first reaction was, ‘George Pérez, comic book legend, wants to premiere his movie at the show?’ So of course, we instantly said yes, and we got straight to work organizing it.”

Genesis Lynn continues, “You’ll get the full movie experience with complimentary popcorn, sodas, and even a special souvenir keepsake for autographs after the premiere. We’re so excited; it’s going to be a great night!”

The special screening of “The Sisterhood of Superheroines: Unchained Malady” will be held Saturday, August 11 from 8-11pm, introduced by Pérezand followed by a Q&A with the creator and actresses from the film. Fans will enjoy complimentary popcorn and soda, and receive a souvenir keepsake from Pérez, which they can have autographed on the night of the premiere.For more information, visit http://fetishcon.com/the-sisterhood-of-superheroines-movie-premiere/.

As Fetish Con™ enters another year as the premier fetish event in the United States, organizers are pleased to announcethis year’s trade show will again be held at the Hilton St Petersburg Bayfront Hotel, located at 333 First St South, St Petersburg, FL 33701. Fetish Con™ organizers are also happy to announce not only is its host hotel booked to maximum capacity, vendor, model, and exhibitor booths are also sold out for its 18th annual fetish industry and community trade show. To viewall alternate hotels approved by Fetish Con™, as well as view the shuttle schedule and route, visit http://fetishcon.com/hotel-travel/.

With a long successful history (http://fetishcon.com/how-it-all-began/), Fetish Con™ brought in over 8000 attendees last year, with over 300 models and 70 vendorson handto meet with fans and consumers. With Kinky Classes, private Twisted Dungeon / play space, live fetish shows, after dark parties, and the famous Pervy Pool Party that never stops, Fetish Con™ has grown to an internationally recognized and hugely anticipated event within the fetish industry and community. Blowing the doors off the party scene in Florida every year since 2004, when the event moved to Tampa Bay from New York, the event brings in thousands of fetish performers, production companies, and kinksters together for an unforgettable four-day weekend.

All-access passes for the 4-day weekend are still available; to register, visit https://www.fetishconshoppingcart.com/all-access-pass/all-access-pass-registration. Single-day wristbands are also available via http://fetishcon.com/single-day-wristband/. All Fetish Con™ events are restricted to those 18 years of age and over; all trade show events, with the exception of sanctioned, off-site, after-hours parties, will be taking place at the Hilton St Petersburg Bayfront over the course of the four-day event.