Behind the scenes with Actress Emma Hix

Adult film star and Penthouse Pet Jayden Cole has been honored with nominations for two 2021 AVN Awards, including the coveted ‘All-Girl Performer of the Year’ prize.
If that wasn’t enough, the popular star also received a ‘Best All-Girl Group Sex Scene’ nomination for her boffo sappho performance in “Alexis Texas Lesbian House Party!” (Elegant Angel, 2020) opposite Texas, Sammie Six, Kleio Valentien, Zoey Monroe, Ana Foxxx, Dava Foxx and Jenna Foxx.
“As a lesbian performer, I am always so excited to be recognized each year with an AVN Award nomination and to see my name amongst an impressive list of women,”said Cole. “But this year, for the first time since 2016, I have two nominations: ‘All-Girl Performer of the Year’ and ‘Best All-Girl Group Sex Scene’ for the wildly unforgettable movie I shot for Alexis Texas, which was one of the most fun experiences I’ve had yet in the industry.”
The 2021 AVN Awards Nominations Party streamed live on AVN Stars on November 19, and featured Cole — who recently debuted a self-shot post-COVID lockdown scene for Brazzers — presenting the nominees for ‘Best Boy/Girl Sex Scene.’
“I was so excited to help announce the nominees for the 2021 AVN Awards,” said Cole. “AVN always puts together the most stunning sets, professional scripts, and performers who look on point for their events and campaigns, and it felt like a small class reunion since we streamed it live on Zoom.
“Much like a lot of the scenes we are shooting these days, we set up our own cameras and lighting which, now that we’re rounding out 2020, we’re all pros at by now. Although I’m definitely disappointed that we can’t have another weekend of great memories and celebrate together in Vegas for the AVN show in January, I sincerely look forward to the virtual events now that my Zoom-party cherry has been popped!”
Recognized worldwide as the biggest night in adult entertainment, the 38th annual AVN Awards Show, presented by MyFreeCams, will be held Saturday, January 23, live on AVNStars.com. For more information, visit AVNAwards.com.
The full list of 2021 AVN Awards nominees can be found here.
Keep up with Jayden Cole’ exploits on Twitter: @jaydencole, Instagram: @MissJaydenCole and OnlyFans. 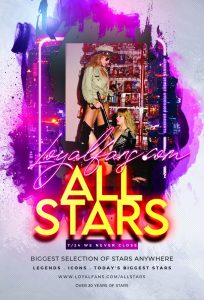