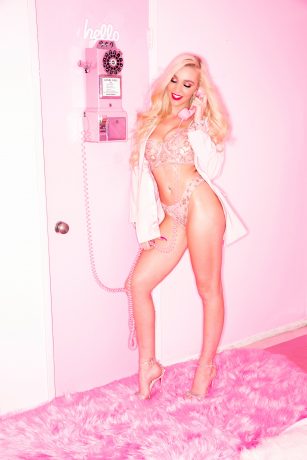 “Thank you Fleshbot for complimenting my boobs with this nomination,” says Kendra. “I invite my fans to vote for me, what a win this would be!”

You can vote for Kendra Sunderland for Best Tits until October 28th. Winners will be announced on November 15th.

Kendra Sunderland’s career in adult entertainment began when a racy public webcam peep show among the stacks of Oregon State University’s Valley Library became the talk of the internet for weeks, and the 19-year-old media sensation’s solo public display has become a viral sensation, earning her nickname, “Library Girl,” a misdemeanor arrest and the kind of infamy that puts a girl on the fast track of stardom.

The former OSU freshman, who launched her career (and the notorious library video) in October, has since left college and shot for magazines like Xtreme, Hustler, Penthouse as Penthouse Pet of the month, and in 2016 became the very first Vixen Angel of the Month. She has won Night Moves Miss Congeniality in 2015 and an XBIZ award for Web Celebrity of the Year in 2016. Kendra uses her online fame to raise money for various charities and to send care packages to American troops. In 2016 Kendra starred in her first hardcore movie, Natural Beauties, directed by Greg Lansky, that won her first AVN Award for Best Boy/Girl Scene of the Year. Kendra during the 2017 Adult Entertainment Expo was crowned Vixen Angel of the Year. In February of 2017 she became a Fleshlight Girl with her very own toy. In 2019 Kendra won the first annual Pornhub Fan Award, Nicest Tits, and in turn Kanye West designed a limited edition sweatshirt with his own drawing of the infamous Library Girl.