Adult starlet Sera Ryder plays the young hottie who helps Branden Richards get over his breakup with her roommate, in the new fantasy scene at DickDrainers.com. 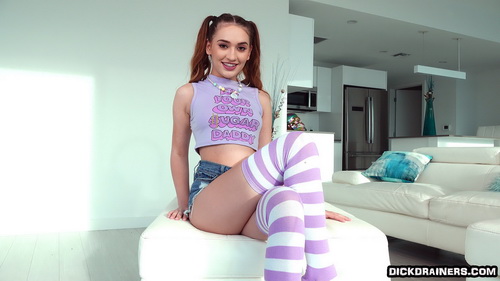 You wouldn’t guess that me and my ex, Jennifer, had only been dating for four months. She gave me a key to her spot ,and I left hella stuff there too. So I let myself in, packing up my shit, when outta nowhere, her roommate Sera charges in the room, about to bust me in the head with a space heater! As if this day couldn’t get even more weird!
After I calm this lil girl down, me and Sera got to talkin’, and it turns out there’s a lot that Sera didn’t know about her bitch ass roommate. Like, how jealous she was of the attention that Sera got. Pretty girls made my ex insecure AF…and I can see why. Sera’s cute AF with a phat lil booty and the sexiest, most seductive smile. And I’m not gonna lie….Jennifer DEF caught me checkin Sera out before, she was mad AFFFFFF!
When I was with Jennifer, all I could do was look at Sera…thinkin’ about her lookin’ up at me as she drained my dick…but now that me and Jennifer broke up…I can do a lot more than just look!
“There’s a phrase that goes: good things come in small packages — and that DEFINITELY applies to Sera Ryder,” raved her co-star, Branden Richards. “Cute as a button but with a devilish smile, Sera came ready to drain some dick and drain it she did! Fans had been requesting this one for a while and judging by the reaction so far, they’re loving it! Expect to see A LOT of Sera in the future!”
Sera Ryder commented: “My scene with Branden was super nasty in all the best ways possible, and I had such a great time getting used by him!”
“Sera’s Tight Teen Pussy Makes Me Forget All About My Ex!” has a runtime of 57 minutes and is available for streaming and download at the DickDrainers official website ( http://dickdrainers.com/tour/trailers/Forget-About-Your-Ex.html ).
Follow Branden Richards on Twitter: @BRichXXX.
Keep up with Sera Ryder on Twitter @SeraRyder
For the latest news from DickDrainers, keep up with the studio via Twitter: @DickDrainersXXX.