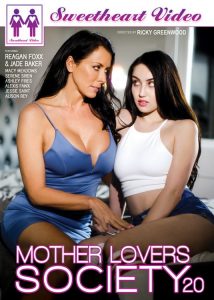 Acclaimed director Ricky Greenwood takes the reins of “Mother Lovers Society 20,” in a forbidden tale of seduction. Starring box cover models Reagan Foxx and Jade Baker, along with stars Alexis Fawx, Jessie Saint, Ashley Fires, Alison Rey, Macy Meadows and Serene Siren.
“Ricky offers viewers a glimpse into the passionate lives of sensual older women and their taboo trysts with their devious stepdaughters,” said Mile High Media Vice President Jon Blitt. “Reagan and Jade are pure dynamite in this film, as they lead a stunning cast in intensely erotic younger/older scenarios.”
“Mother Lovers Society 20,” begins with young Debbie (Jade Baker), whose life is turned upside down after she learns that her father and his girlfriend Carmen (Reagan Foxx) are getting married. She loves Carmen, but she’s not ready to have a new stepmom. Things get worse when her two best friends, Karen (Macy Meadows) and Carter (Jessie Saint), make a pact to seduce their stepmoms. Although Debbie is not pleased with the idea, her two friends jump all over it.
The first one to fulfill the pact is Karen, who has had eyes on her dad’s wife, Sheryl (Serene Siren), for years. Carter doesn’t waste any time either. The next day during a hot yoga session she seduces her stepmom Alicia (Alexis Fawx). Now the ball is in Debbie’s court. Even if she is seriously attracted to her future stepmom, she refuses to complete the crazy pact… But everyone has a breaking point.
Shot in HD, the DVD features four scenes of lesbian sex, as well as a slide show of exclusive photos, behind-the-scenes footage, animated chapter index, no regional coding, and more.
Sweetheart Video is the place for those lovers of girls who can’t have enough soft breasts, fully shaved beauties and toe-curling orgasms. It features high-quality lesbian erotica and lesbian porn with real orgasms and the hottest adult stars.