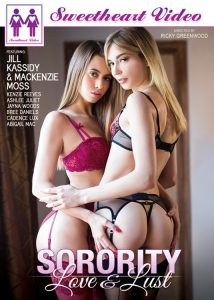 Sensual college girls share their lesbian passions in “Sorority Love & Lust,” the opening chapter of a new series from Mile High Media’s all-girl studio, Sweetheart Video. The movie is now available on DVD.
Ricky Greenwood directs “Sorority Love & Lust,” starring box cover models Jill, Kassidy and Mackenzie Moss, along with Kenzie Reeves, Ashlee Juliet, Jayna Woods, Bree Daniels, Cadence Lux and Abigail Mac in four tales of hot lesbian sex.
“In his inimitable style, Ricky presents four amazing scenes of great chemistry and intense orgasms from an amazing cast of performers,” said Mile High Media Vice President Jon Blitt. “Jill and Mackenzie highlight this series opener with an intensely passionate scene that will leave viewers breathless.”
“Sorority Love & Lust,” begins with Miss Brando (Jayne Woods), a sorority housemother, who reminisces on her wild days as a young student in a sorority where a lot has changed, but some things like love, passion and sisterhood remain the same. Madeline (Mackenzie Moss) and Penny (Jill Kassidy) are reunited after a year apart and Madeline convinces Penny to join her sorority. Things get hot and heavy when Madeline explains the light hazing ritual and the pair finally kiss.
Meanwhile, Lucy (Ashlee Juliet) and Julia (Abigail Mac) play with a Ouija board and get some intimate answers from the other side. Things aren’t as simple for Cynthia (Cadence Lux) who has been struggling to get out of bed while in the throes of first semester blues, But with the help and affection of her sorority sister, Sara (Bree Daniels), Cynthia, starts to see the bright side of life. Passion also finds Miss Brando during Thanksgiving break, as she relives her wild youth, when she is seduced by a lonely student Isabelle (Kenzie Reeves).
Shot in 4K HD, the DVD features four scenes of lesbian sex, as well as a slide show of exclusive photos, behind-the-scenes footage, animated chapter index, no regional coding, and more.
Sweetheart Video is the place for those lovers of girls who can’t have enough soft breasts, fully shaved beauties and toe curling orgasms. It features high-quality lesbian erotica and lesbian porn with real orgasms and the hottest adult stars.